Uncle Sam is feeling the squeeze

In the report for the period ending Feb. 28, total federal revenues came in at  $3.275 trillion. This was 1.1 percent lower than the $3.31 trillion reported for the same period one year ago. It represented the biggest drop since 2008 and the third consecutive month of decline.

ZeroHedge explained why this is particularly significant. 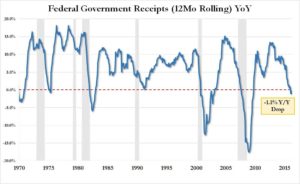 Much of the revenue decrease is due to plummeting corporate income tax receipts. This could indicate corporate America is already in a recession – at least for IRS purposes.

Individual income tax revenue came in at $611 billion, slightly higher than last year, but declining. Many analysts consider federal income tax receipts an important indicator of the state of the U.S. economy.

Declining revenues haven’t done anything to slow the roll on federal spending. The Treasury’s total take came in at $172 billion. Uncle Sam spent about $364 billion. That calculates to a deficit of $192 billion. That was larger than the $190 billion expected.

To sum it up, the U.S. government is spending more and more and taking in less. This isn’t exactly what you would call a sustainable financial plan.

About the Author: Jack Burns

Jack Burns has extensive experience in the insurance business. In 2002, after spending over a decade in the industry, he left to join the family business. Over the next 15 years, the business grew to nearly $100 million in sales with 200 employees. The family sold the business to a private equity firm in 2015, and Jack decided to get back into the insurance industry specifically to provide guidance to others who want to grow their business or personal wealth into having unlimited options.