Central Bankers Have Inflated a Stock Market Bubble; What Happens When It Pops? 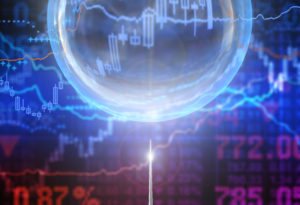 A lot of Americans gauge the health of the economy by looking at the stock market.
This may seem logical. The market ostensibly reflects the overall condition of the country’s businesses. If that’s the case, it makes sense that a strong stock market would reflect a strong economy. If things are generally good, businesses will thrive and rising stock prices will reflect this health.

But in an economy controlled by central bankers, this reasoning falls apart. In the United States, the Federal Reserve possesses tremendous power that can distort the stock market, along with the price of other assets, including real estate and bond markets. Instead of reflecting the state of the economy, these asset markets end up responding to monetary policy and blowing up into giant bubbles.

We find ourselves in this very situation today.

“The horse of speculation is ahead of the cart of enterprise.”

Grant said that while the U.S. stock market continues to surge, the industrial economy is flirting with recession. Hard numbers reported by the Wall Street Journal back up his assertion.

Grant summed it up this way:

“I think that the industrial manufacturing economy is visibly entering of flirting with recession. The yield curve is flat and flattening. Inventories are building, notably in autos. I think what is most notable for investors is the notable, maybe singular juxtaposition of sky-high asset markets on the one hand with softening activity on the other. And on the third hand, the existence of this persistent radical monetary experimentation.”

In fact, there are numerous data-points that indicate the U.S. economy may have already entered recession territory.

But you would never know this looking at the stock market. While eight years of extreme monetary policy has done little to jumpstart any kind of robust economic growth, it has pumped up a giant stock market bubble. Grant compared it to a cat in a tree.

“I think with respect to the asset markets we can imagine a little kitten up at the top of a tree…We might label this kitten ‘stocks, bonds, and real estate.’ And one might imagine a fire-lady named, say Janet, at the top of the ladder saying, ‘Hey little fur-ball, how’d you get up that high?’ So central banks have coaxed and manipulated asset prices higher. They have succeeded not at all in coaxing or manipulating [economic] activity higher.”

In fact, last March Yahoo Finance reported on analysis showing that 93% of the entire stock market move since 2008 was caused by Federal Reserve policy:

“The bull market just celebrated its seventh anniversary. But the gains in recent years – as well as its recent sputter – may be explained by just one thing: monetary policy…The S&P 500 doubled in value from November 2008 to October 2014, coinciding with the Federal Reserve Bank’s ‘quantitative easing’ asset purchasing program. After three rounds of ‘QE,’ where the Fed poured billions of dollars into the bond market monthly, the Fed’s balance sheet went from $2.1 trillion to $4.5 trillion.”

What we have is what Peter Schiff has called a “phony wealth effect.”

“I think the volatility in the markets has been created by the Fed. The Federal Reserve is the reason the market is so high in the first place. They inflated it. They did it deliberately to engineer a wealth effect. It’s phony wealth, unfortunately. When you create phony wealth with a stock market bubble, the result is substantial malinvestment. You encourage all sorts of uneconomic activity to take place. You get rampant speculation. Of course, when the artificial high wears off – and that’s what’s happening now, particularly now that the Fed has raised interest rates and is posturing as if it’s going to raise them some more – the air is coming out of this bubble.”

If all of this seems familiar, it is. This is exactly what happened in the years leading up to the 2008 crash. Federal Reserve monetary policy coupled with government incentive blew up a giant real estate bubble that finally went “pop.”

Interestingly economists like Paul Krugman claim that all of the Fed’s money printing and interest rate manipulation has not led to the spiraling inflation many critics of these policies predicted. But Krugman and other keynesians have blinders on. Sure, central bank monetary policy has not led to rampant price inflation (yet), but it has created asset inflation – a stock market bubble.

About the Author: Jack Burns

Jack Burns has extensive experience in the insurance business. In 2002, after spending over a decade in the industry, he left to join the family business. Over the next 15 years, the business grew to nearly $100 million in sales with 200 employees. The family sold the business to a private equity firm in 2015, and Jack decided to get back into the insurance industry specifically to provide guidance to others who want to grow their business or personal wealth into having unlimited options.